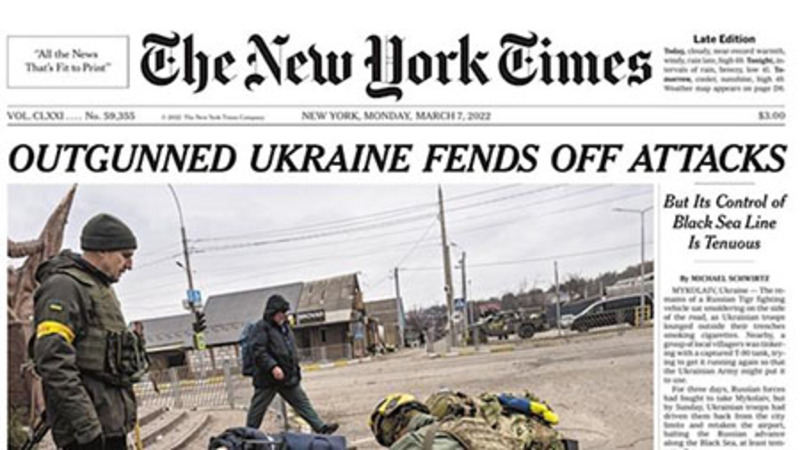 Many Americans see the Russia-Ukraine War as an extension of the 1945-1991 Cold War that pitted the U.S. and its NATO alliance against the former Soviet Union.

The smaller Russian Federation that succeeded the former Soviet Union, however, is not the Communist Soviet Union. Communism was rejected by the Russian Federation, which strives for economic growth through a freer more capitalistic economy with a more democratized political system. These economic and democratic reforms are far from perfect. Abruptly transitioning from corrupt totalitarian Communism to a freer society seeking the public good was a mountainous task and that task is still ongoing.

One reason, many Americans view the war as an extension of the Cold War, is a statement by Vladimir Putin that the fall of the Soviet Union was one of the greatest disasters in history. Putin, however, was a free-enterprise reformer. His regret was that a great nation had fallen apart. Putin is a Russian nationalist, and he believes that abandoning Communism and adopting a much freer economic system was and is necessary to make Russia great again. However, true economic freedom cannot be supported without parallel democratic reforms.

Putin is definitely a more authoritarian leader than the Western model. Russians seem to prefer strong leaders. His longing for a more powerful and influential Russia is much more comparable to the Russian Empire. With regard to Ukraine, the original Kievan-Russ Empire or “Holy Russia,” which lasted from about 840 to 1240 AD included Russia, Ukraine, and Belarus. This is an important factor in understanding the political situation even today. There is also a strong element of Russian Orthodox Christianity tied to this. At any rate, the short-cut analogy between the Russian Federation and the Soviet Union is imprecise enough to be dangerous.

It is also important to know that both Russia and Ukraine have undergone a major revival of Christian identity since the fall of the Soviet Union in 1991. Christianity was severely suppressed under Communist rule. Mikael Gorbachev’s reforms began to loosen both political and religious suppression. Yeltsin, Putin, and Medvedev fully embraced a revival of Russian Orthodox Christianity in 1991. A 2017 Pew survey indicated 73 percent of Russian adults identified as Christian. Seventy-one percent of Russian adults specifically identified as Russian Orthodox. A 2018 Pew survey of Ukrainian adults found 72 percent identified as Christians with 65 percent identifying as Orthodox. Western Ukraine has many Greek Catholics. A similar Pew survey in 2019 indicated that Christian identity in the United States had dropped to 65 percent.

Vladimir Putin personally identifies as a Russian Orthodox Christian, takes part in formal church activities, and actively encourages church growth. Influenced by several Russian Christian writers, he also believes Russia will be an important force in sustaining Christianity in the world during the last days before the return of Christ. Neither Russian nor American “exceptionalism,” however, though generally positive in Christian aspirations, are based on unequivocal specific Biblical support.

Russian Orthodox Christianity tends to be conservative in Scriptural doctrines and moral and family values.

Another widespread misunderstanding is that Ukraine is a nation of unified Ukrainians. Ukraine is actually a nation with some distinct ethnic conflicts. The foremost of which is that about 17 percent of Ukrainians are ethnic Russians. These are a majority in most southern and eastern oblasts (states) in Ukraine, including Crimea. Crimea has never been more than 25 percent Ukrainian. The Ukrainian governments since 2014 have tried to “Ukrainize” these Russians and their children, causing bitterness and resentment. This is what the Donbas War involving the Donetsk and Luhansk oblasts is all about. In past elections, a strong pro-Russian sentiment can be seen in the southern and eastern crescent from Kharkiv through the Donbas, Crimea, and all the way to Odessa, which is Russian speaking and oriented.

An ethnic Russian Ukrainian from the near the Black Sea has recently explained in a 36-minute YouTube video entitled, Composition of the Ukrainian Nation, that Ukraine can be divided into four ethnic elements. The Russians with 17 percent are mostly Russian Orthodox and under the Moscow Patriarchate. The western Ukrainians are predominantly Greek Catholic rather than Orthodox, and also make up about 17 percent of the total Ukrainian population. This area was once part of Austrian-Hungary, and most of it was the Galician region of Poland until 1939. Western Ukraine is as anti-Russian as eastern and southern Ukraine and Crimea tend to be pro-Russian. Putin frequently refers to western Ukrainian political activists as Nazis, which is just as meaningless today as American Leftist activists calling people Nazis in the U.S.

The pure traditional Ukrainians are the second largest group and were also affected by the church conflict engineered by Biden and the Ukrainian government to sever cultural ties between Ukrainian and Russian churches. These Ukrainians have strong traditional ties with Russia but generally do not want Russian government influence in Ukraine.

There are also smaller groups in Western Ukraine, such as Carpathians and Ruthenians, that are different in culture and dialect. If Ukraine were to break-up, Poland could make a claim to most of Western Ukraine. The video on the Composition of the Ukrainian Nation can presently be found on the website, Russians with Attitude.

The point of all this is that the Russia-Ukraine War is not just a geopolitical power struggle. Ethnic and religious factors weigh heavily in the origins and continuation of conflict.

Putin’s ambition probably no longer involves all of Ukraine. However, Ukraine as a threatening NATO member is totally unacceptable to him and most Russian leadership. His present ambition is probably to annex the southern and eastern crescent from Kharkiv (Russian Kharkov) to Odessa and keep Crimea, which was annexed after the 2014 War. To fully understand the 2014 War and the situation in Ukraine today, it is necessary to study the February 2014 “Maidan Revolution” when pro-Russian Ukrainian President Viktor Yanukovych from the Donetsk region was forced from office by organized rioting and replaced by pro-Western billionaire oligarch Petro Poroshenko. See my April 4, 2022, article, Behind the Curtain of War in Ukraine.

Beginning in late August of this year with the Ukrainian counter offensive, the war has become more clearly a NATO versus Russia war with Ukrainian solders doing the heavy bleeding and the U.S. supplying enormous amounts of equipment, money, and intelligence with a little training help from the British.

The recent NATO-Ukraine offensive in front of Kharkiv only took back less than 2 percent of the Russian occupied territory, and the Ukrainians wound up with high casualties from Russian artillery as they advanced, but it was a Ukrainian political victory that got the Zelensky government more badly needed support and commitments. It also stunned Putin into the reality that 200,000 Russian and allied soldiers are not sufficient to defeat 700,000 Ukrainians backed by seemingly unlimited American money and equipment.

Putin has called for a partial mobilization of 300,000 Russian reservists. One liberal network has reported that Russia had called for a full mobilization. That might be close to 25 million Russian veterans on active and inactive reserve status! This illustrates the need for a healthy skepticism of Biden-parrot journalism. Meanwhile, it will take more than three months to get 300,000 Russian veteran-reservists up to combat effectiveness.

However, Russians and especially Putin have learned a virtue too few Americans appreciate — patience. Moreover, it is already snowing in southern Poland. Winter will soon be upon us, and it could be disastrous for major NATO allies, especially Germany. Because of their foolish embrace of climate change ideology, which is already wrecking several economies, NATO aid to Ukraine except from the United States is likely to take a back seat to WINTER COLD. It could even result in the breakup of NATO to obtain the natural gas they need to prevent social, economic, and political disaster. It turns out that sanctions on Russian gas and oil have had relatively minor effects on Russia but threatens ruinous hardships on Western Europe. I would be surprised if the Russians do a major offensive in the next months. Putin will just wait for winter to take its toll on fuel-short NATO. Moreover, unnoticed by most of the Western media, four Russian airstrikes demonstrated they could take down more than half of Ukrainian electric power in less than three hours.

Putin’s main effort will probably be Russian Aerospace Force and Rocket Force attacks to stop NATO equipment and munitions from coming to the Ukraine battlefront.

Meanwhile, the Biden-Obama Administration is doing everything they can to destroy American military effectiveness with Critical Race Theory, transgender ideology, and other woke insanities.

The amount of wildly exaggerated propaganda on the war spewed by Biden-Parrot media — The New York Times, Washington Post, ABC, CBS, NBC, CNN, MSNBC, and PBS — is enormous. Perhaps they plan to portray Joe Biden as a successful war leader to increase Democrat votes in November 2022.

Meanwhile, according to retired U.S. Army Colonel and military consultant Douglas MacGregor, Ukrainian military casualties are running 20,000 per month, and there is now irresponsible talk of “limited” nuclear war by some NATO officials (source, MacGregor). A more noble ambition than weakening Russia by bleeding Ukraine would be to find a way for a cease-fire and balanced negotiation on realistic terms for peace.

Mike Scruggs is a columnist and former USAF intelligence officer and combat veteran of the Vietnam War. He is author of 'The Un-Civil War: Shattering the Historical Myths' and 'Lessons from the Vietnam War: Truths the Media Never Told You'

Castros are dead, but the people still 'want out'
Opinion